skip to main | skip to sidebar

Good Times Deep in the Jungle 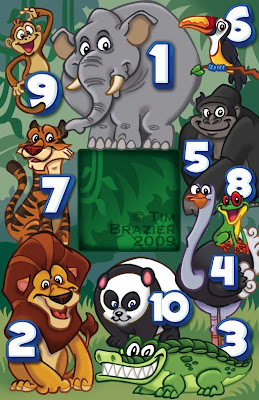 We just had a baby boy and while I think that I should be able to do a pretty fair job as his Father I sometimes wonder if he wouldn't be better off if I just dumped him off in a jungle somewhere to be raised by the animals. Seriously how cool would it be to be raised by wolves, gorillas, elephants or lions! Not only would you be able to learn to talk with all the animals but you would also learn all sorts of skills that you would never learn in any human school. Swinging through trees, wrestling with tigers, and riding ostriches the list goes on and on. A man can be free in the jungle you can yell goofy sounds at the top of your lungs and all you have to wear is a loin cloth (unless you are riding an ostrich, you should probably wear pants if you are going to do that.)

This is an illustration for a game that I did for Patch. Good times.
Posted by Brazier art at 7:45 AM 1 comment: 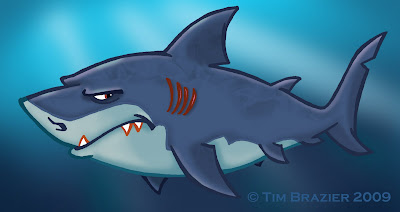 I really like sharks. When I was a kid growing up in San Diego we went to the beach a lot I was always a little scared of stepping on a sting ray or being eaten by a shark. I've since changed my mind, everyone has to go sometime right? So I say if you have to die do it in style. I imagine that in the next life everyone is going to be talking about the neat things they did when they were alive and how they died. I don't wanna be one of those poor saps that has to timidly admit that they died one night during their sleep I would much rather recount my gruesome death torn apart in the jaws of a Great White. Sure it would hurt and all but who's to say that it doesn't hurt dying in your sleep, we assume that it's painless but I haven't heard anyone who's had the experience confirm that idea. Death by shark attack is defiantly the way to go, so if you ever win an all day ocean cruise with a sea captain, a police cheif, and a scientist on boat called the "Orca" I say go for it.

I still am afraid of stepping on a sting ray that seems like it would really hurt.
Posted by Brazier art at 7:25 AM No comments:

Brazier art
I am a professional illustrator and graphic designer. I work with Save-A-Lot foods as a brand designer and do a whole lot of freelance for all sorts of folks. I grew up in San Diego California and have since lived in Utah, Ecuador and now Missouri. I am hoping this blog might be a good way to stay in touch with friends and clients scattered around the globe. I have an online portfolio (timbrazier.com) but I wanted a place to feature some of my rougher concepts, sketches and ideas. I love to draw and I hope you enjoy my work. 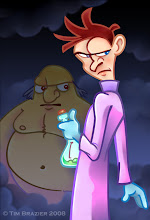